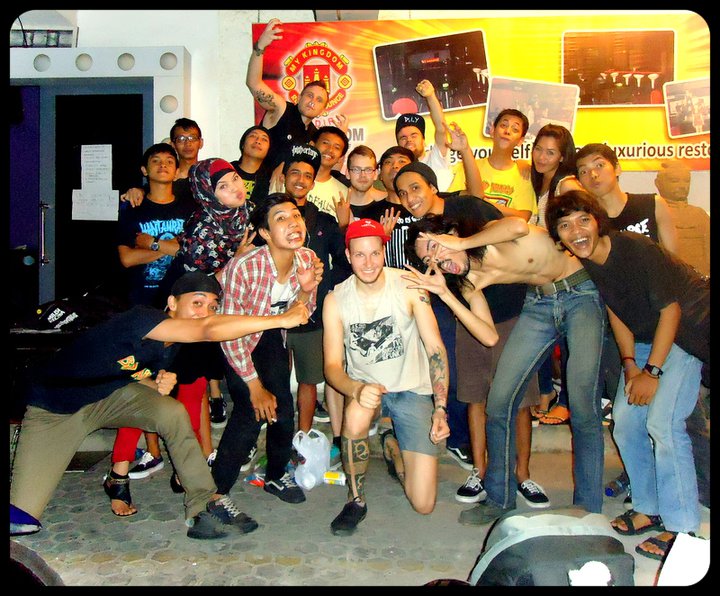 Suspicious venues, nervous breakdowns and a lot of fun

What’s wrong with you?

On the night before last I didn’t get any sleep and that took a surprisingly high toll on my mood. We took a train from Kediri to Malang early in the morning. So no sleep, no breakfast, four and half hours on a completely full train with no hope of getting a seat and a constant flow of vendors trying to sell anything and using the wonderful marketing strategy known as loud yelling. Well, it was bearable and as soon as we arrived in Malang we ate some tahu (tofu) and tempeh with rice, like we do three times a day.

Our Kediri show was in no less than a strip club, complete with dancing poles and boxes of tissues on each table. We played on the bar desk. The show went well and the sound was better than average. The other bands were good, especially a band called Hantamrata. The people who organized the show had rented the place, so we didn’t really have anything to do with the evil people behind it. They invited us to go there for free after the show ended and the place was opened for business. We didn’t.

Malang. A bus trip to the out door venue. On the way we saw an example of privilege and injustice: a high end neighborhood. The campus where the show was was also pretty chic and shiny, with marble and glass everywhere, surrounded by a fence with guards on the gate. I don’t know if the show was open for students only or for everyone. I’ll find out soon.

Things looked good at first. The first band we saw was Xenobiotic, grindcore with female vocals. Excellent stuff. There were some good distros and we did a little shopping and trading, which was fun. There was also a Food Not Bombs stall and an anarchist zine library. I read a little about the mudslides in East Jawa, some kind of corporate caused eco catastrophe that’s ruined the lives of lots and lots of people, I don’t remember how many.

At some point I was really tired and annoyed and angry and pissed off and murderous and destructive and crying for no real reason, like sometimes may happen. It seemed to be the perfect mood to play a show in. The show was for my part the most energetic so far and the audience seemed to like it too. Someone even seemed to know the finnish lyrics for the refrain of one of our songs. I got a little too wild though, and at the beginning of our first song I fell down, breaking the skin on my knee and twisting my wrist, which luckily didn’t disrupt the rest of the gig. So, another photo for the upcoming injury gallery. Tuukka is the only one still intact, though he got some blisters on his toes from playing basketball in bare feet. He emptied them with a safety pin in candle light during a black out.

Oh, in Pati I did the basketball throw of the century. A one handed cartwheel with the ball in my other hand, and straight from the landing I tossed the ball in the general direction of the basket and whoop!!!!! It didn’t even touch the rim! It was a stroke of pure luck or otherwise I’m capable of anything!But we all are, so that’s nothing special.

In Kudus me and Janne got to ride bikes, which was great.

Half way through the tour. The others went out for a little partying last night while I stayed in and read some zines.

(ps. We’ve heard about four live covers of that Agnostic Front song Gotta gotta gotta go! or what ever it may be called.)

Mikä ihmeen / Vad i världen är / What in the world is DIYTurku.net?